What is Participatory Budgeting?

Participatory Budgeting (PB) is a democratic process in which community members directly decide how to spend part of a public budget. In 2018, the Durham City Council allocated $2.4 million dollars to implement participatory budgeting in the City of Durham.

How does Participatory Budgeting work?

Participatory Budgeting (PB) involves a two-year cycle of meetings, voting, and project implementation. It becomes part of the broader budget decision-making process. Each city, school, or organization that does PB adapts it to their specific needs, but PB generally follows these steps:

1. Design the Process - A steering committee, appointed by council, creates the rules in partnership with government officials to ensure the process is inclusive and meets local needs.
2. Brainstorm Ideas - Through meetings and online tools, residents share and discuss ideas for projects.
3. Develop Proposals - Volunteers, usually called budget delegates, develop the ideas into feasible proposals, which are then vetted by experts.
4. Vote - Residents vote to divide the available budget between the proposals.
5. Project Implementation - The government implements the winning projects, such as bus shelters, Wi-Fi in public parks, or sidewalk improvements. The government and residents track and monitor implementation. 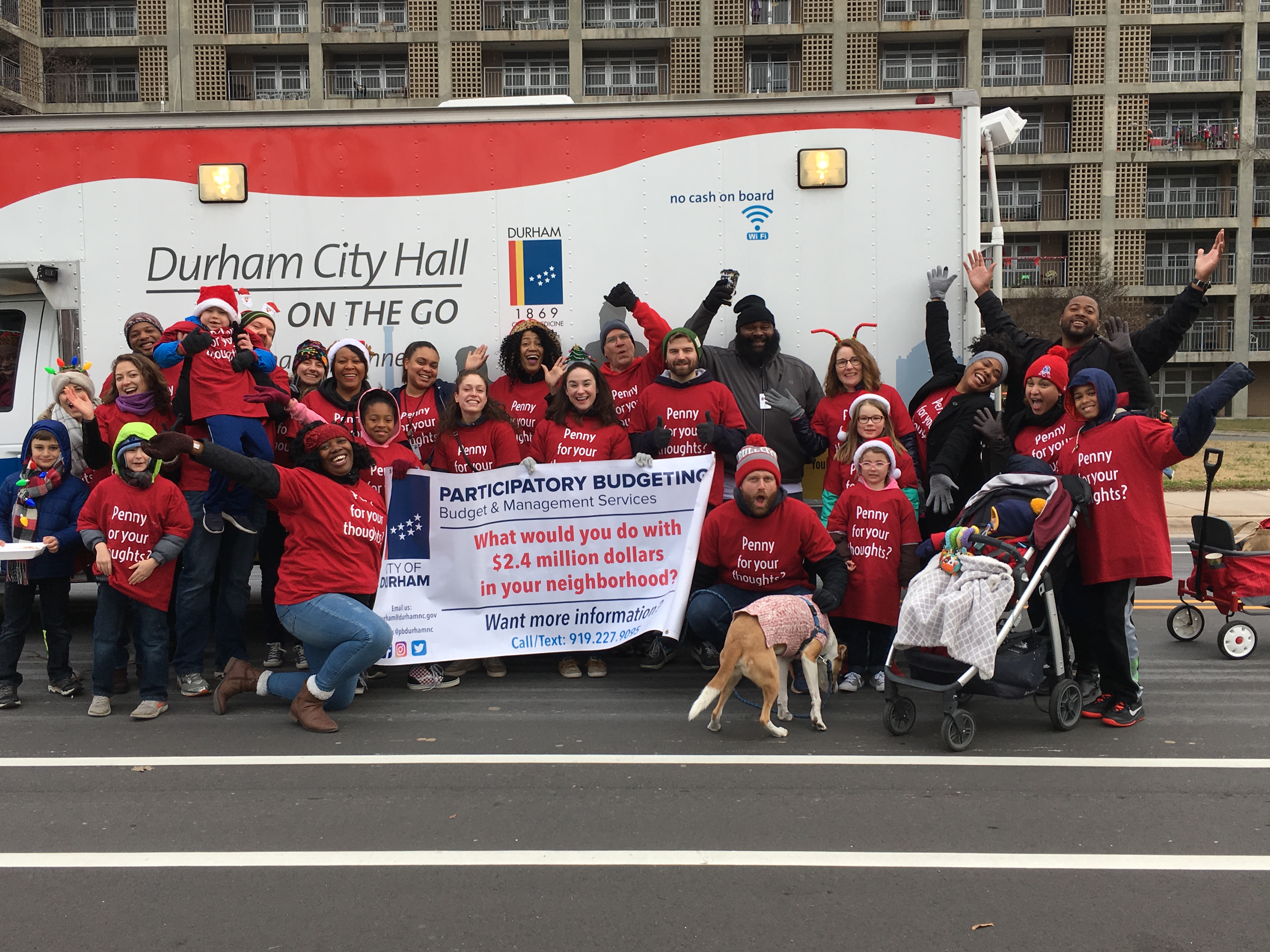 How does Participatory Budgeting work in Durham?

City Council has committed $2.4 million for Durham PB projects. Each of the 3 City Council wards has up to $800,000 for residents to decide upon for use in one-time projects.

What are One-Time Projects?

One-time projects are projects with one-time expenditures that address a community need. Projects can be built on City, Durham Housing Authority, and private land, upon donation. “One-time projects” may include physical infrastructure, technological improvements, and community enhancements. Examples of “one-time projects” include park improvements, computers for a community center, bus shelters, and bike-lanes. “One-time projects” may have some sort of associated operating cost. However, they do not require the City to hire additional staff. Monetary donations will not be considered. Before projects are put before a public vote, they must be reviewed by the City Manager, City Staff, and the Participatory Budgeting Steering Committee to ensure they meet all legal requirements.

The process was first developed in Brazil in 1989, and there are now over 1,500 participatory budgets around the world.

The vast majority occur at the municipal level of government. PB has also been used for counties, states, housing authorities, schools and school systems, universities, coalitions, and other public agencies. For more information about the history of PB and other municipalities that have implemented this process please visit: participatorybudgeting.org

Would you like to request a PB presentation at your community event?

Fill out this online form and we will contact you ASAP!